Especially for Orctober we wrote you a little history lesson on Orcs. We hope you enjoy it..

The oldest instance of Orcs known to literature dates back to the times of Cain and Abel when Cain killed Abel in cold blood out of jealousy and contempt. God punished Cain to a life of misery and fruitless wandering where he became the father of a generation of Enochs. In the famous Anglo Saxon poem Beowulf, adored by alliterations, orcs are considered as extended descendants of Grendel- the poem’s main antagonist. Famous eighteenth-century Italian poet Giambattista Basile mentioned orcs in his fairy tales.

A crossbreed of humans and animals, the flesh-eating humanoid formed presumed by Orcs makes them inherently disgusting to look at. Having a shared DNA, their characteristics distinguish them from the rest. Physically strong and rigid, they make excellent soldiers and their commander puts the ingrained rage in them to excellent use. In Tolkien’s universe, orcs (referred to as Uruk Hai) were led by Saruman during the Third Age to wreak havoc upon their enemies. Dwellers of Mordor, they would be found wielding double-edged swords and dripping themselves in the blood which would send them into fits of rage. The following lines are a testament to their brutality:

“We are the fighting Uruk-hai! We slew the great warrior. We took the prisoners. We are the servants of Saruman the Wise, The White Hand: The Hand that gives us man’s-flesh to eat.”

The aforementioned statement clearly depicts one underlying fact: that despite being brutal and murderous, orcs need a ruler to follow commands. On their own, their raggedness would result in self-implosion of epic proportions.

The popularity of orcs wasn’t confined to the classic English literature, but the instilled barbarianism made them a leading character in multiplayer fantasy games. In World of Warcraft, their coming into being was due to abandoning of their sentient peaceful culture. They were corrupted by the demonic lord Kil’jaedean and were enslaved to commit hideous acts of sheer barbarianism. They invaded Azeroth numerous times, using their hardiness to fair advantage. In case of duels, they were less likely to be stunned and backed to the wall.

In Dungeons and Dragons, orcs were referred to as cave dwellers with a pale green slouched body and lupine ears. Carnivorous in nature, they carry the tendency to disturb the peace by shifting their allegiance with evil forces owing to their rage-filled nature. An embodiment of patriarchy and capitalism, they believe that everything in this world belonged to them and was forcefully taken away by the humans.

However, William Blake presents Orc as complex creatures that personify rebellion due to his complex relationship with the parents. Described as a journey of self-exploration, it started with Ork assuming the form of a giant serpent, to a vicious satanic demonic and then finally into Luvah- a symbol of love, passion and rebellion. Luvah is the part of four Zoas where the first man was divided into four: Urizen, Tharmas, Luvah & Urthona. As opposed to Urizen’s conventionalist and controlling ideas, Ork/Lubah believed in passion, courage and rebel. A figure of serenity and divine energy, Orc presents itself as a positive character in Blake’s complex mythology. 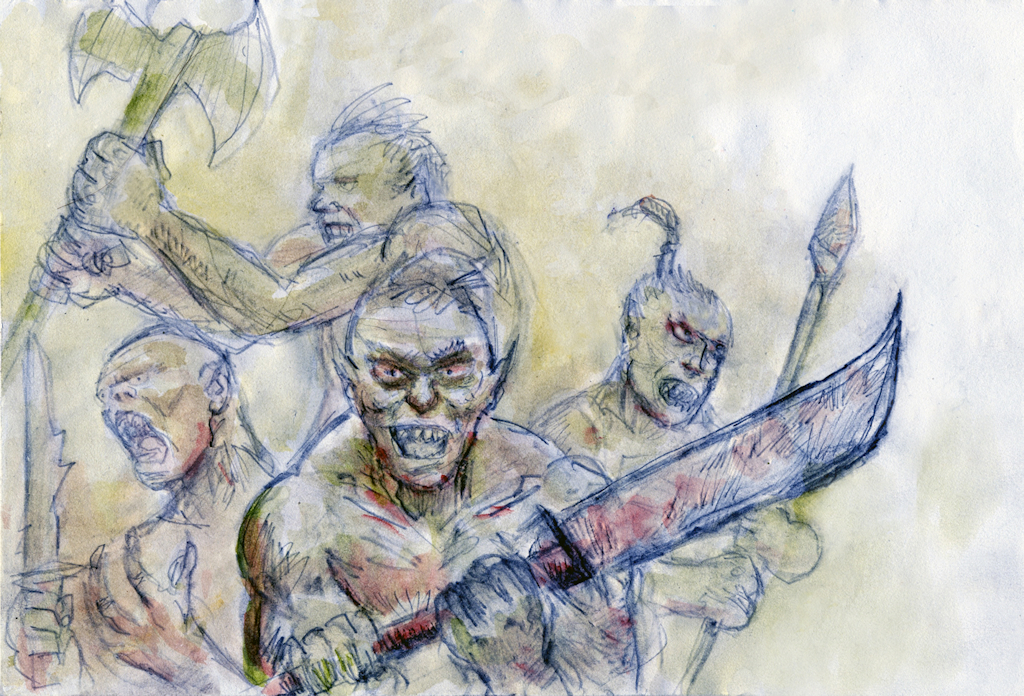