So, I have posted about my Momir Basic cube before, once about how to actually play Momir in paper and once shortly with the hi-res Vanguard card template release. Today I want to talk some more about Momir Basic, but this time I would like to delve into the strategies I used to actually curate the cards in the cube and what I learned about which cards to use, and which to avoid.

I broke down this article in a few subjects, starting with…

In Momir Basic on MTGO there are no limits on which creatures you can get, any creature card ever printed in MTGO is fair game, the card pool actually is endless. However in paper this is not possible. A quick Scryfall search tells me there are over 12000 creature cards in M:TG, physically it would be a Herculean task to sleeve, store and carry around all those cards. It would be unplayable too, just think about the nightmare that shuffling or sorting all those piles of cards would be. Last I doubt many people would have the budget to actually buy all the cards. Even when proxying, let’s say a proxy would cost €0,5 to produce, you are still looking at over €600, which is quite a lot to spend on fake cards.

So with all these things in mind I decided to curate my cube to 60 cards per CMC, devided in 10 per color, 5 artifacts and 5 multicolored cards. For the lower CMC’s this breakdown is not a problem at all, however from around CMC8 I did have to shift around this division a bit because options are starting to get pretty limited here. No cards over CMC10 are included.

I think most people will agree with me when I say that M:TG is the most fun when cards actually synergise, interact or add something meaningful to the playing field. It’s just feel-bads when the RNG decides to hand you a card that does absolutely nothing for the board state. So, I set up some rules on what to include and what to avoid:

During construction of the cube I noticed that from CMC8 and upwards options are beginning to get limited, so I started ignoring those rules, because otherwise the card pool would become too small.

Selecting the cards for a Momir Basic cube is quite a process, especially when trying to stick to the cube-building rules I set. But, luckily, Scryfall is your friend here. For example: Find all Blue creatures from Kaldheim with a CMC5 that are cheaper than €2:

Now here are some example of cards. I’ll explain why you would want a card in your cube, and why you’d maybe skip it

Alrund: This card is actually cool, even though the chosen card type will always be Land. I would put it in the cube. It’s cool and exciting since it grows only bigger with each trigger!

Berg Strider: Although it’s a snow permanent. It does not really synergise with anything snowy. No reason to leave this out. Also its ETB lets you put an enemy creature on hold for a bit

Frostpyre Arcanist: It’s ETB trigger lets you search your library for instants and sorceries. Not really exciting to get this card, since noone’s deck will contain any of these card types. I do not recommend adding this card to your cube.

Mulldrifter: Although its Evoke ability is useless, the rest of the card is actually cool. So, why not add it to the cube?

Finally, I need to talk about storage. Because you might want to carry around your cube to gamenights. You will probably want to protect your cards and it’s nice to keep them sorted a bit.

So for storage I can highly recommend the Ultimate Guard Arkhive 800+. It will fit 10 deckboxes, each for every CMC value. I used the cheap plastic fliptop boxes myself, with some sticker labels on them 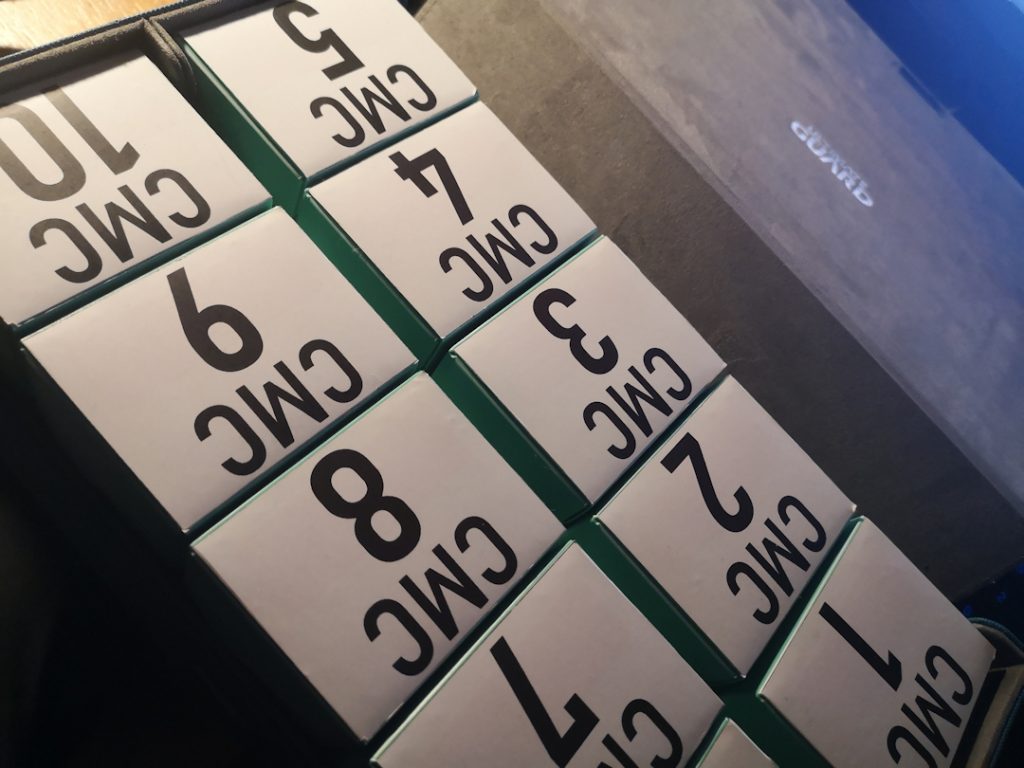 Feel free to ignore my ramblings, it’s all just my opinion. Just do whatever you want, as long as you don’t forget to enjoy the game!