Despite the rapid growth and application of computer technology in all aspects of human life, a variety of board games remain common in the twenty-first century. Table soccer or foosball is one of them, and it has captured the hearts of both football and board game fans. Click here https://getfoosball.com/everything-about-foosball/ to find out more.

In theory, foosball is a miniature version of its bigger sibling. The machine is designed to look like a miniature football field. Every team has ten players and a goalkeeper, just like in regular football. Four rods rotate around their axis with football player figures fixed on them. The game’s object is to score as many goals into the opposing goal as possible in a set amount of time.

When was foosball invented?

Even though foosball boards have become so ingrained in our lives, few fans know their origins. This game first appeared in the early twentieth century. In the first several decades of the century, many similar games that resembled foosball appeared and were eventually patented. The first patent for a game that resembles modern-day foosball was obtained somewhere around 1913.

Edwin Lawrence, an Englishman, was the inventor. However, instead of eleven players on the field, he had two goalkeepers play the entire game. Harold Thornton, also from England, copyrighted his version of the game ten years later, most similar to the modern one.

However, the most widely accepted version of the game’s origins claims that Alejandro Finisterre created it from Spain. He was wounded during the Spanish Civil War and wound up in the hospital, where he devised this game as a form of amusement for the wounded soldiers. In 1937, Finisterre patented his creation, but the patent was lost during a storm when he attempted to go to France to escape fascism. Click here here for more information.

After WWII, the United States learned about the game, thanks to American soldiers, and the first world championship was held in Denver, Colorado, during the 1980s. According to the German version, football was first invented in Germany somewhere in the 1920s or 1930s. This game was played on a rectangular box with spinning rods.

The French version is particularly intriguing. According to it, one of Citroen’s employees, Lucien Rosangartan, was the first to develop the game. By the end of World War II, this game became very popular and spread all around Europe.

The mid-twentieth century marks the start of a new era in the history of table football. With the advancement of the industry, unique gaming boards started to be manufactured in place of wooden tables, contributing to the game’s continued popularity. Find out more fun facts about foosball by doing research online.

The game was released later in the USSR than in Europe, and it quickly became popular among youngsters. The first tournament in Russia was held in 2000 in St. Petersburg, and only one year later, the foosball federation was created in Russia. Every country at the time had its federation, but it was in 2002 when the International Table Football Federation was formed.

What materials are used for this game?

This game is trendy and widely spread everywhere in the world. Usually, it can be found in various bars and pubs where people can play and have fun while drinking their beer. This game is also famous by the name of kicker, and accordingly, the players are called kickers. Some of the best establishments that manufacture this board game are renowned companies in France, Italy, and China.

What rules apply when it comes to foosball? 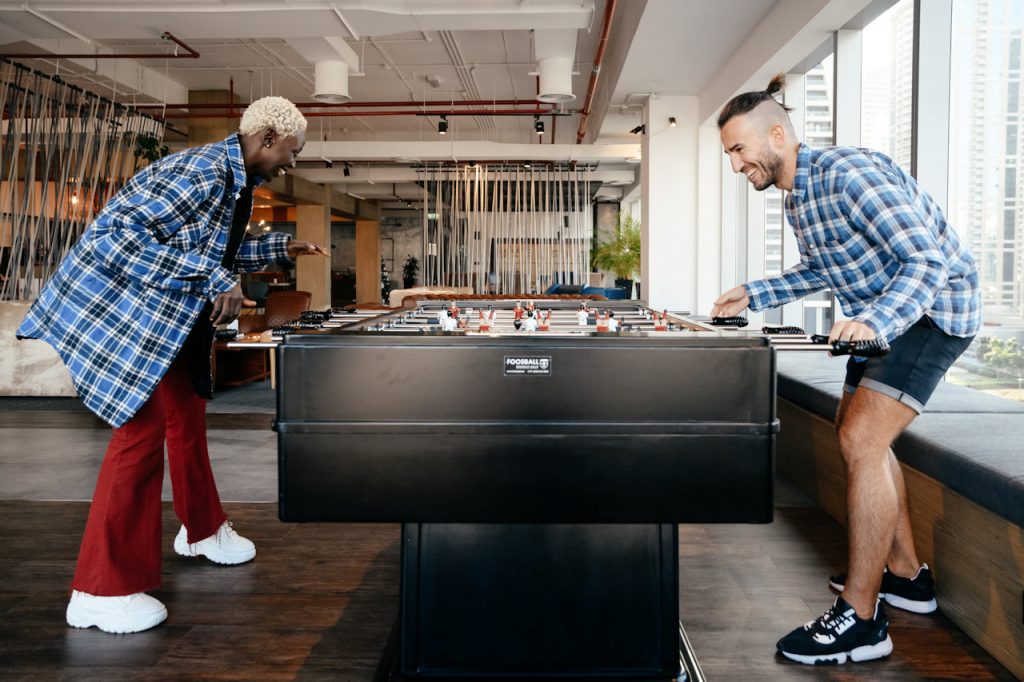 In terms of the game’s rules, they vary slightly from country to country. Despite this, players in professional tournaments adhere to the International Federation’s rules. The critical rule is that you should not hit the ball with your hands and that you should not move the handles more than a full circle or 360 degrees.

You are not allowed to shake or move the table board. This game is very entertaining for children who learn to think ahead and logically plan their moves. Even though winning is the ultimate goal, a fair fight should always be the first principle. This game can be played with four people, two on each team, or even with only two people. Check out https://foosballkingdom.com/ to find out more.

When the game is played between two opponents, you are in charge of the whole team, and you have the power to control what happens on the board. Even though the teams are not real, you can have the privilege of being the leading coach of an entire set of players.

You can find foosball boards at game stores, but the most widespread selection of different types of this game can be found online. After purchasing this game, examining the rules and studying them in detail before playing is vital. Like any other game globally, different rules are set by the players or by the manufacturers, but some general rules apply to everyone.

The first thing is to decide how many people will play the game, meaning establishing the opposing teams. Then, you can usually determine who will play first by throwing a coin or use an alternative way that suits you the most. The first team who plays is setting the ball on the field, and the ball enters from the middle line of the board. Click here for a detailed explanation.

Any player can score a goal in the opponent’s gate. It’s forbidden to shake the rods violently or even spin them more than a full circle. If the ball has entered the goal but somehow managed to jump back on the board, the goal is still counted.