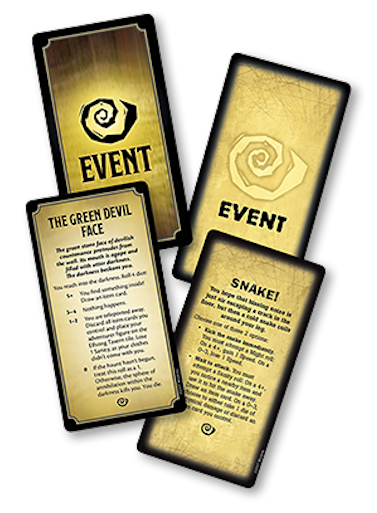 Betrayal at House on the Hill is a tile game that allows players to build their own haunted house room by room, tile by tile, creating a new thrilling game board every time. The game is designed for three to six people, each of whom plays one of six possible characters.

Secretly, one of the characters betrays the rest of the party, and the innocent members of the party must defeat the traitor in their midst before it’s too late! Betrayal at House on the Hill will appeal to any game player who enjoys a fun, suspenseful, and strategic game.

Betrayal at House on the Hill includes detailed game pieces, including character cards, pre-painted plastic figures, and special tokens, all of which help create a spooky atmosphere and streamline game play.

An updated reprint of Betrayal at House on the Hill was released on October 5, 2010.

Wizards of the Coast announced a new Betrayal at House on the Hill based on the destructive Legacy system.

With the legacy system each game has consequences for the next game, building a multi-game story. Part of the mechanics are the literal destruction of game parts, putting stickers on cards to change them permanently, and other ways to make sure that the game will not stay in mint condition when playing.

Other games getting this treatment in the past were: Risk, Charterstone and Seafall amongst others.

The game launch is expected for Q4 2018, and we are excited already.